The first thing that struck Kade Beaumont as he entered Darbyville was the sameness. Sure, he’d seen a Walmart on the edge of town and there was a CVS Pharmacy where the old Rite Aid used to be. But the IGA and Eddie’s Fill Er Up still remained. Six years he’d been gone, but it felt like it was yesterday.
As he entered the town square, the location of the county courthouse an 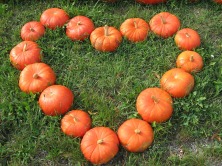 d administration center, he saw the maple and elm trees in all their fall-colored drapery. Reds, oranges, yellows speckled with brownish greens served notice that he’d entered fall country. That was the one thing he’d missed about Darbyville, autumn when the town seemed to come to life.
Halloween was only two weeks away, he reminded himself. He’d already seen a ghost or two hanging from trees, and other assorted decorations. Soon, the square would be filled with vendors plying their wares during the town’s annual fall festival.
Not that he’d be among them. At least he doubted that his mom and sister had anything planned from the last text message Cindy had sent him.
One among many imploring him to come home.
Well he was here now with a mission to accomplish so he could head back to Florida. But first, a bite of lunch before he faced his memories.

* * * *
Watching her mother glance at her watch again, Cindy Hayden frowned in exasperation. She’d just checked it not more than ten minutes ago.
“Stop looking, Mom. He’ll be here.”
Sighing, Cleta Beaumont said, “He should be here already. He did say he was coming, didn’t he?”
Now, Cindy sighed. “Yes, Mom. He texted me this morning. He stayed overnight around Nashville.”
“It’s just, you know,” her mother continued, “he’s been gone so long. The memories are so painful for him, I wouldn’t be surprised if he’d just turn around and head back to Florida.”
“I know, Mom. But he is coming. Why don’t you go make some ice tea? I’m sure Kade would appreciate that after his long journey.”
“You think so?”
“Yes, Mom. Please. Go.”
She watched her mother rise from the worn couch, smooth down the flowered dress she’d sewn herself many years ago, and make her way to the kitchen, her gait slowed by the lingering limp from the spill she’d taken last week. Her left arm remained in the sling old Doc Barton had said could probably come off this week.
It was that spill that had caused Cindy to send the text to Kade begging him to come home, pleading that his mother needed him.
She gazed out the front window hoping to spot Kade’s truck, praying that she was right and he was still on his way. She didn’t know how she’d handle things if he didn’t arrive as promised.
* * * *
Reaching the kitchen, Cleta pulled a wooden chair from the table and sat. Her family had enjoyed many a meal around this table, she thought, brushing a tear from her eye.
But those were long-distant memories, all she had left, besides the farm, of what once had been. She knew Cindy knew she already had tea waiting for her son. She was aware that her daughter had grown tired of her restlessness while awaiting Kade’s arrival.
She hoped Cindy was right, that her son would appear as promised.
It’d been way to long since she’d last seen him, right in this room, six years ago.